Not a busy night on the bands, but conditions were pretty good.  It was nice to hear Radio Verona for the first time.

I cleaned all my antenna connections yesterday, which seemed to reduce the background noise level quite a bit, particularly on mw and 76 m.  Conditions were also fairly good, at least for the first few hours.

3099,0 . . 0142 . UNID, very weak music, hard rock, no details and faded after 5 minutes (a Ukrainian listener in chat said this was a Ukrainian pirate with a music show).  I could detect the carrier for almost another hour (slowly drifting down close to 3098), but no more audio heard.

It was a fairly quiet weekend on the shortwave bands.  Props were not that good, so it seems that most stations were on mw.  Still, I did manage a few logs.

Conditions were horrible on Friday night ... one of the worst nights I have seen here.  Last night was much better on 48 m (thankfully!), but 76 m and mw were still dead.

6274,8 . . 2128 . UNID, had been able to detect a carrier for hours, finally got some weak music, but nothing I recognized, chatters reported Marabu so might have been this rare station

I also received this great QSL from Andre for my reception last weekend.  Thanks! 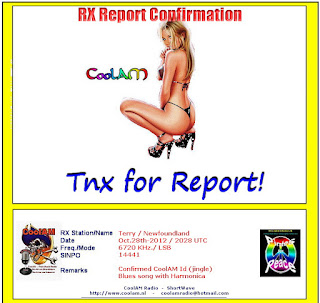