I recently received this nice QSL from Fox 48.  Nice design! 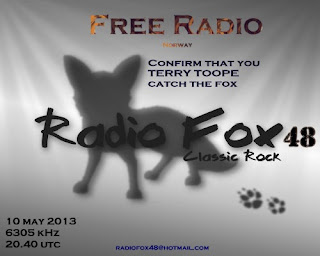 Also, I received the first QSL from Man Cave Radio, a new station from the US.  Nice rules!  Thanks Bob. 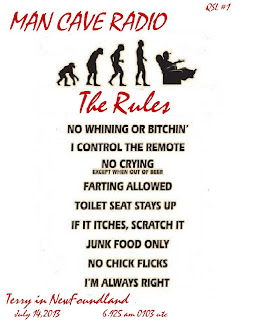 It was a scorcher here today!  Over 31 C, and the second hottest day on record.

First, I have now entered semi-retirement.  I have closed my office, and will now run a reduced version of my business from my phone and computer.  After 24 years of 12 hour days, I am looking forward to more time for family and hobbies.

Also in the last few weeks, I had family return from across Canada for my parents memorial service and burial.  One of the things that I did for the memorial service was prepare a slide show of old pics.  As a little tribute to the man who introduced me to shortwave, here are pics I discovered of both him and me at our respective corner of our "radio room" from about 1978-9.

My father's equipment was either Heathkit or self-built.  My radio was a Yaesu FRG-7 (which I still have) and behind me is the Hammerlund HQ-180 boat anchor that I started on.

Another complication ... in late June my antenna feed suffered it's annual "failure".  I finally got a chance to rebuild it on Saturday, so I did hear some stations on Saturday and Sunday nights.